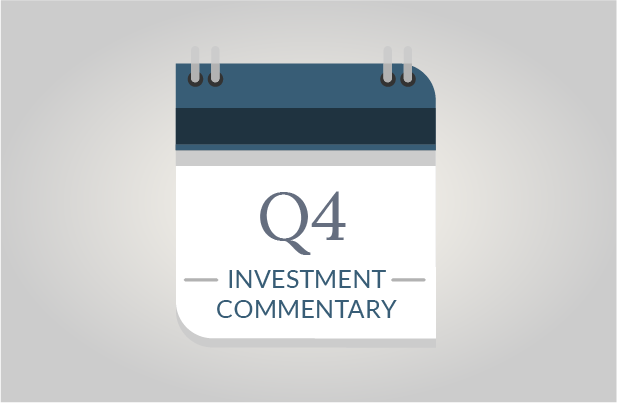 Pleasant surprises materialized for investors during 2012, after a lackluster 2011. The prior year’s European debt crisis and fiscal concerns persisted, yet the investment markets rejoiced in the wake of much negative news. In fact, 2012 was dubbed ‘risk-on’ as the riskiest sectors enjoyed the largest returns. Domestically, the beleaguered financial and home building sectors posted the strongest performance while utilities fell to the bottom rank. Perhaps the largest surprise was in Europe, where Greece (yes, Greece!) captured the highest stock market gain.

What SageVest Wealth Management finds noteworthy is that investors were able to achieve handsome returns without incurring excess risk, demonstrating that an even-keeled investment approach can allow you to achieve your objectives while still being able to sleep at night.

Media coverage highlights of 2012 tended to focus on the negatives far more than the positives (as is unfortunately the norm). We can’t dismiss headlines such as riots throughout Europe, Fiscal Cliff concerns domestically, or the fact that the world economy remains persistently weak. However, achievements received little coverage beyond what the stock market reported by virtue of higher valuations. 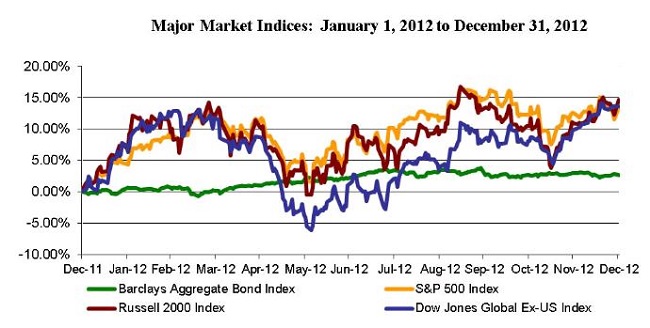 Progress in Europe was likely the least discussed achievement on a relative scale. We moved from concerns that Greece would exit the European Union in May to significant fiscal and political commitment to the union and its currency in June. This turnaround spawned one of the strongest mid-year stock market rallies and dramatically helped to reduce borrowing costs among Southern European countries.

We also had a number of positive advancements domestically. Our housing market posted the longest running recovery in years. The manufacturing sector continued to expand, with a particularly strong year in autos. And jobs began returning to the US helping to pull our unemployment rate below 8%.

The world economy continues to face challenges, but fortunately not without advancements. Our thoughts about possible investment headlines of 2013, good and bad, are shared on the following pages.

We technically went over the Fiscal Cliff by one day, as Congress approved new tax law changes late on January 1st. Realistically, the Fiscal Cliff is far from over. Tax rates were addressed as part of the recent agreement, and the result fortunately provides a tax code void of ‘sunset’ expiration provisions that we have endured since 2001. However, all sequestration elements (spending cuts) were simply deferred for another two months. Debates over spending cuts will likely coincide with the debt ceiling debate, adding fuel to the political fire. To muddy the waters a little more, discussions about further tax increases to offset any possible spending cuts surfaced less than one week after we reached a tax ‘agreement’.

The Negatives: The bulk of the country just experienced what is effectively a 2% pay-cut as the employee Social Security ‘tax holiday’ expired. This is expected to put a drag on consumer spending. Additional sequestration measures could further constrict the economy through lower government spending and broader economic ripple effects. On a combined basis, tax increases and government spending cuts are estimated to potentially cause a 3% to 4% drag on the economy.

The Positives: A 3% to 4% pullback in the economy would be significant. However, there are a few offsetting variables. First, not all of the spending cuts would go into effect overnight. The impacts would be felt more gradually rather than like a shock-wave. Perhaps more important, renewed clarity regarding our fiscal future (void of ‘what-if’ spending cuts and tax increases), could unleash business spending and private sector hiring. Companies have been sitting on record cash balances in excess of $2 trillion for quite some time, holding ‘safety cushions’ to protect against unknowns. The removal of fiscal unknowns could allow some of this money to come off the sidelines, fueling long-term sustainable growth.

Decisions extending into February could easily trigger market volatility. Realistically, we don’t expect the full swath of spending cuts technically mandated to go into effect. We rather anticipate some ‘compromise’, lessening short-term burdens. We are therefore viewing this as a possible buying opportunity, the magnitude of which could depend upon the permanency of any deal.

One area of the world where spending cuts and tax increases remain prevalent is Europe. Austerity measures continue to fuel public debates and protests. They also definitively thrust Europe into recession in 2012 ¡V a recession that could easily persist into 2013.

Europe remains a difficult economic environment, certainly riddled with risks. In fact, we fully anticipate more negative headlines in 2013, particularly as Spain is expected to need a bailout. That said, the future prospects for Europe have become more encouraging as countries are putting their fiscal houses in order and as the region as a whole has shifted to a more unified structure.

Continued Eurozone unification could allow Europe to become the benefactor of renewed investment interest. Massive sums of money left Europe in recent years throughout the European debt crisis. This flight of capital pushed many quality European company stock prices to very low valuations. While money began flowing back into Europe at the end of 2012, there is still a long way to go to re-establish prior capital levels, possibly signaling future investment potential at attractive prices.

We remain generally underweight among European stocks, but began rebuilding exposure over the summer and throughout the later part of 2012. We are evaluating additional investments among European and international markets for the points discussed above, as well as for currency considerations discussed later in this commentary.

After five years of declining interest rates, we have started to see an uptick in rates, particularly among Treasury bonds. A relatively precipitous shift occurred when the Fed deviated from its low interest rate policy through 2015, to an undetermined timeframe dependent upon achieving an unemployment rate of 6.5%. This sent a signal to the markets that the Fed could shift its policies earlier than previously anticipated.

The current unemployment rate of 7.8% means that unemployment must fall by an additional 1.3% before the Fed might pursue alternate actions. Looking to the recent past, we moved the unemployment needle by this same amount over the last 15 months. This means that a shift could occur well in advance of 2015 if employment continues to improve.

Markets tend to be forward looking, and typically react well in advance of actual economic results. This is what we are seeing in Europe, and what we expect in bonds if unemployment continues to improve. While we don’t foresee short-term potential for rampant inflation, a small upward adjustment in rates could have a detrimental impact on bonds. This is something material to consider, particularly among assets intended to provide capital preservation.

The outlook for interest rates remains highly dependent upon economic growth. Any economic derailments could move rates lower yet again. Conversely, even modest economic improvement could push rates higher, creating what we believe to be a growing risk in bonds. We began repositioning efforts as rates hit historic lows, in part shifting away from bonds as well as changing the composition of our bond holdings to become more defensive. Further shifts could be implemented, although likely only after upcoming domestic spending cuts and debt ceiling debates are resolved.

Finally, we see two potential headwinds for the US dollar. Our currency has benefited from significant capital flows into the US, largely as a ‘flight to safety’ from Europe. As money begins to return to Europe, this has the potential of reversing money flows and putting downward pressure on the dollar.

Furthermore, a possible shift in Fed policy would create the need to attract greater buyer interest in Treasury bonds. Looking to 2013, the Fed is poised to ‘buy’ almost $1 trillion of the $1.3 trillion of bonds that the US needs to issue to finance its debt. If the Fed pulls back from its bond buying program upon reaching a 6.5% unemployment rate, this would require significantly more Treasury bond buyer interest. There are two ways to attract buyers. One is to offer higher bond yields, thereby increasing US government borrowing costs. The other is to lower the value of your currency to attract foreign buyers, which we expect would be the preferred choice.

A lower currency policy has obvious negative implications. Fortunately, it is also a distinct difference between how the US might deflect future debt level problems in comparison to Greece and Spain which remain tied to the broader and resilient Euro currency.

We are not making any significant portfolio changes at this time, but this longerterm outlook gives greater support for increased international portfolio positioning as we navigate forward.

SageVest Wealth Management’s investment positioning going into 2013 remains committed to both growing and preserving wealth. As always, we encourage you to contact us with any questions about your investments or personal financial pursuits. 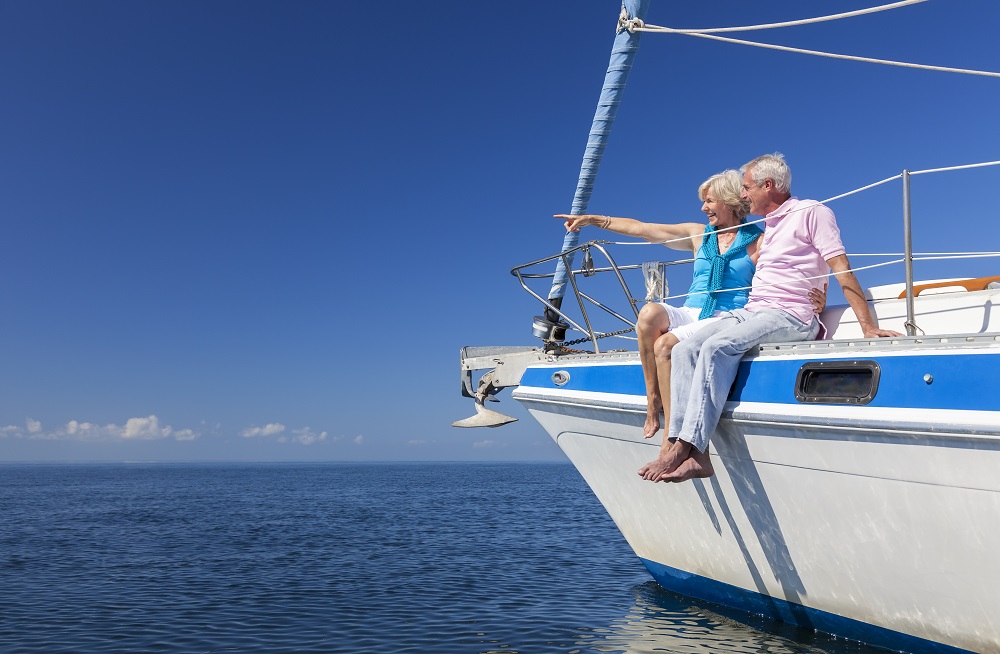